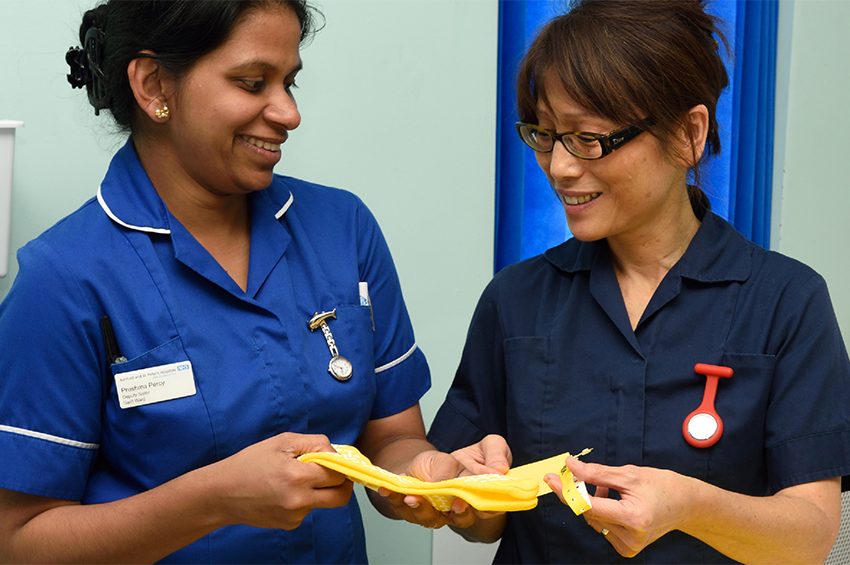 A yellow socks and blankets scheme has been introduced on our wards to help staff identify patients who have a high risk of falling and sustaining serious injury.

Biomedical Scientists Judi Scott and Sareh Farshchi from our virology team at St Peter’s have been recognised for their outstanding contribution to the Ebola crisis in Sierra Leone with special medals. They both spent two months working in a temporary laboratory in Sierra Leone earlier this year testing blood samples and swabs for Ebola.

Have you seen the dots at St Peter’s Hospital?

Have you noticed the coloured dots on the walls at St Peter’s? An innovative idea from our portering department, the dots show patients and visitors how to reach various departments across the hospital, by following the relevant colours. The idea won special funding from our Be the Change initiative last year.

A joint safety initiative led by consultant anaesthetists at both Ashford & St Peter’s and the Royal Surrey County hospitals was launched recently at Brooklands Museum. Around 150 staff from both hospital Trusts gathered for a launch event with a difference; a line-up of inspiring speakers was complemented by a private tour of part of Brooklands Motor Museum which included a Formula One racing car on loan for the evening from local F1 race team McLaren.

Known as SCReaM – Surrey Crisis Resource Management – this safety initiative recognises the pressure that staff can find themselves under during surgery and how, during particularly stressful situations, it can be difficult to instantly recall certain processes or work efficiently together as a team.

Dr Suzi Lomax, Consultant Anaesthetist at the Royal Surrey County Hospital, and co-founder of the project explains more: “Every year around 234 million operations are performed around the world, with around 3 million resulting in some form of adverse event – in other words where something goes wrong. If we apply that locally, out of around 53,500 operations a year that could mean 775 where something doesn’t go to plan. And in the worst case scenario, that could mean a death that might have been preventable. We know that under pressure, making split second decisions in certain scenarios can be difficult. Even simple, routine procedures can suddenly escape us under stress. This initiative introduces a series of simple visual aids and prompts to help staff make the best decisions in these situations.”

Dr Rob Menzies, Consultant Anaesthetist at Ashford & St Peter’s, continues: “As well as the visual aids – prompt cards which are clearly laid out and colour coded in special folders – we are introducing a wide training programme, not only to familiarise staff with the material but importantly working as teams using the latest simulation techniques. Topping the list of external speakers, staff heard from Dr Kevin Fong, TV Presenter of BBC’s “Horizon” and Channel 4’s “Extreme A&E”, also a consultant anaesthetist by profession, with a special reference to the way the infamous Challenger Shuttle disaster was investigated. The other speakers included Mr Andrew Blackie, Senior Inspector (Operations) Air Accidents Investigation Branch and Karl Surmacz from McLaren Technology.