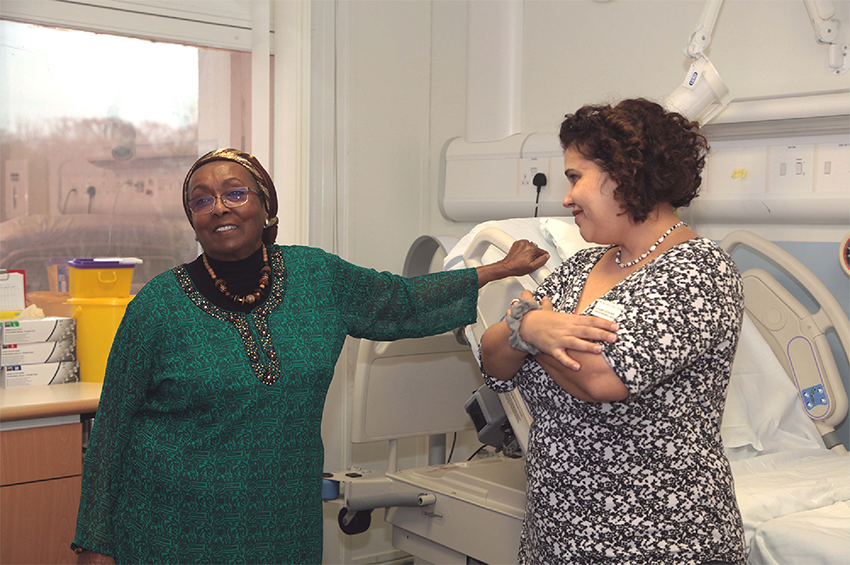 Edna was born in Hargeisa, the daughter of a prominent Somalilander medical doctor and was trained as a nurse in the UK at the Borough Polytechnic, now London South Bank University, where she is said to be 'the first Somali girl' to study in Britain. She also claims to be Somalia's first qualified nurse-midwife.

Edna has had a very distinguished career to date, being the first lady of Somaliland, a representative of the World Health Organisation and Minister of Social Affairs. On her official 'retirement' Edna gave up her luxuries and started the movement to build a hospital in Hargeisa to provide care for those in need during pregnancy and childbirth. Edna is also an activist and pioneer in the struggle for the abolition of female genital mutilation (FGM).

Whilst on NICU Edna showed staff just how midwives in Somaliland have to adapt and reuse equipment whilst maintaining safety and cleanliness. This was demonstrated by Edna showing how a used saline drip set can become a manual suction tube.

Edna gave a very powerful talk on inequalities in healthcare and also her fight against FGM (Female Genital Mutilation) for which she has been recognised by the United Nations. The visit came about after John Blackburn, who works in the Transport Department, met with an old friend, Ian Fenwick. Ian had talked to John about Edna who had built a hospital in Somaliland from rubble and despair of a war torn region in East Africa with so much passion and conviction that it was an opportunity that couldn't be passed off.

Speaking about her visit Edna said: "I was very touched by the preparations that you had made to show me around and the time that you gave me to share with you some of what we are trying to do in Somaliland.

“Having visited many hospitals in my time, I can honestly say that your hospital, Ashford and St Peter’s, stands out well above the rest. I found that you have a modern state-of-the-art facility that has not lost its human touch in the process." To find out more about Edna Adan and her hospital visit www.ednahospital.org.