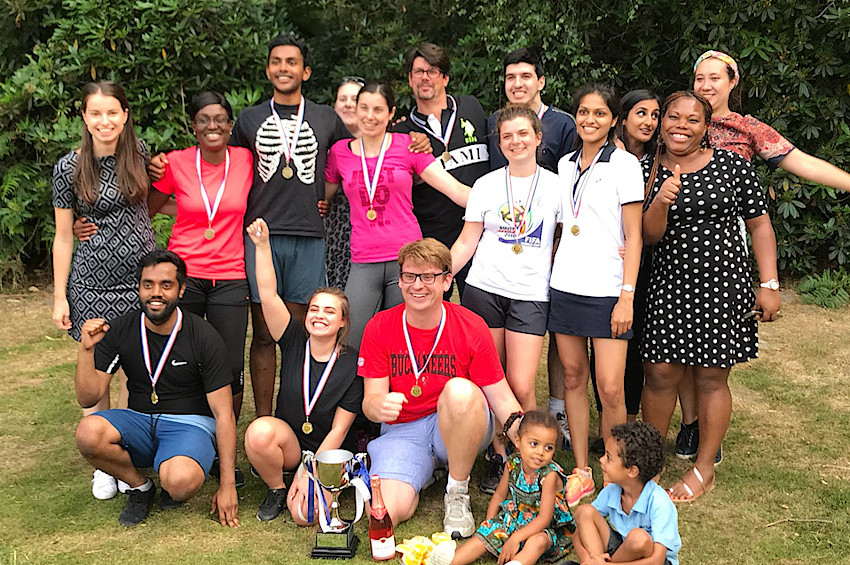 After many many matches with lots of laughs and team bonding the second Ashford and St Peters Rounders Tournament drew to a close.

The final was hotly contested between the Put your Belly on the Telly (Gastro) and the Sputum Pluggers (Respiratory).

First up to bat was Gastro. Nice to see some really good female sluggers out on the pitch doing it for the girls and scoring several rounders. Some really good team work kept Respiratory on their toes!

It was time to swap and the Bellies were out on the field with the Pluggers batting. Two of the best deep fielders ever seen were playing in the Gastro team and just did everything to perfection. They could run, throw and caught some amazing balls! Well done to them. The Pluggers batted on with some awesome slugs at the ball until they were down to two players who still hung on with more grit and determination to get round those posts and win. One went out and then it was down to one who unfortunately was stumped out at second base.

Before the winners were announced there was much hand shaking, tunnel dancing and merriment between the teams on the pitch. The scores were announced and the winner of the Ashford and St Peter’s Rounders Tournament 2018 was …… GASTRO - Put Your Belly on the Telly.

Huge congrats to that team - led by a very determined Dr Matt Farrant. The trophy is currently residing on May Ward and will be taken and engraved with their name and presented to them at the Staff Achievement Awards in September.

See you all next year for more thrills, spills and lots of belly laughs with your team.