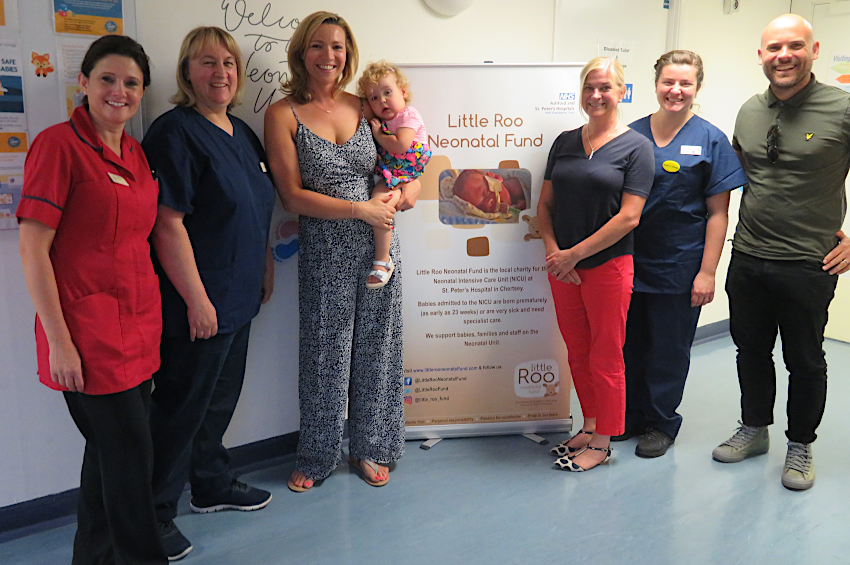 Little Roo Neonatal Fund were lucky enough to be nominated as ‘Charity of the Year’ by Talon Outdoor Media Agency by colleagues Tom and Charlie Perret after their daughter Aurelia was cared for by the Neonatal Intensive Care Unit (NICU) at St Peter’s Hospital. Aurelia was born at 34 weeks in St Peter’s Hospital on 3 July 2017 and spent three weeks in NICU.

Talon held their sixth birthday party at Café De Paris, London in April where a charity auction was run and they raised a huge amount of money. Little Roo, the dedicated Neonatal charity for St Peter’s Hospital, will receive £103,000, the single largest donation the fund has ever received and Talon are still fundraising! Talon are also supporting a charity called FAB and funds will be divided between both charities.

Charlie Perret, Aurelia’s mum said: “We are so grateful for the incredible care she was given and immense support we got from everyone, doctors, nurses and all the staff at the Neonatal Intensive Care Unit at St Peter’s Hospital.”

Dr. Tracy Lawson said: “We were all delighted to see Aurelia today who came to visit NICU with her parents. It is her 2nd birthday and she came with treats and beautiful smiles for the staff who looked after her at birth. It is wonderful to see what a beautiful little girl she is growing up to be – full of fun and energy! Two years ago she was born prematurely at 34 weeks and also received therapeutic hypothermia – a treatment usually used for term babies but was felt would be beneficial for Aurelia at the time. Seeing her grow up and make great progress is incredibly rewarding for us all.

“We are incredibly grateful to her parents Tom and Charlie who have raised a fantastic £103,000 for our Little Roo Neonatal Fund – the largest single donation from a family ever! Thanks to Talon Outdoor Media Agency who hosted the charity evening in April. The Little Roo charity supports our neonatal unit allowing us to provide the best equipment and care for extremely sick babies and their families. I have had the pleasure of following Aurelia’s progress in outpatients and I am looking forward to seeing her soon for a final visit!”

Sarah Jane Robertson, Matron said: “It was a delight to welcome the beautiful Aurelia, with her mum and dad to the unit. Immense gratitude and thanks goes to Aurelia’s family and friends for this amazing donation. We are very excited as there is so much that we can do with this donation that will make a huge difference to the babies and families we care for on NICU at St Peters. We cannot thank you enough.”