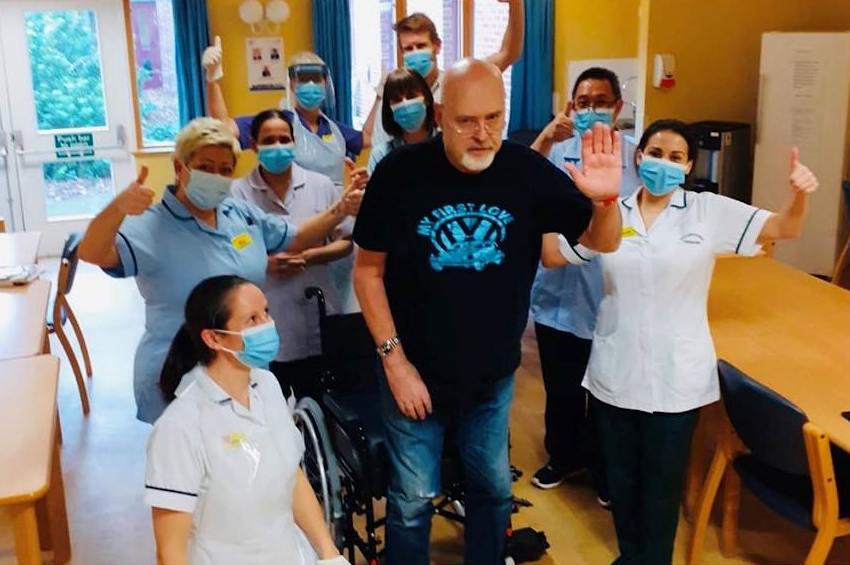 We are delighted to be able to share the story of Sean Fitzpatrick, who this week has been discharged after spending eight months in hospital at St Peter’s and the Bradley Unit in Woking.

Before becoming unwell, Sean was working as a BA steward and living completely independently.

Sean was admitted to St Peter’s back in March with COVID-19. He was very unwell and required to be intubated by the team in ICU. After making some improvement he was extubated, but unfortunately his health deteriorated and he had to return to ICU.

During his time in ICU, it was discovered that he had suffered multiple infarcts in his brain and a DVT in his upper limb. Subsequent EMG tests showed peripheral nerve damage to his right hand and leg.

He was transferred to a step down bed at the start of May and was then admitted to the Bradley Unit a couple of weeks later. On admission, he required a full sling hoist for all transfers and assistance of two people to move in bed. He was fearful of falling, even in bed.

Over the past six months, Sean has made an incredible recovery, with support from the whole team.

He has been participating in group strengthening exercises, can roll himself onto his front and onto his knees and complete an exercise programme independently. He has done some walking with an elbow crutch and started to manage steps. Last week, Sean had a very successful home visit, which included him getting in/out of the car.

The team at the Bradley Unit who have worked closely with Sean, supporting his recovery have praised his positive outlook and determination to get home, Jenny Cheetham, Physiotherapist, says; ‘the thing that has been incredible, working with Sean, is his positivity through all of this. He has kept us all laughing. He has a long road ahead of him and a new life to adjust to but he remains very positive about his experience and regularly expresses his great thanks to everyone that has been involved in his care.’

The exemplary care and support that Sean received by all of Team ASPH are testament to his remarkable recovery and we wish him the very best as he settles back into life at home.

Pictured above: Sean thanks some of the team at the Bradley Unit in Woking