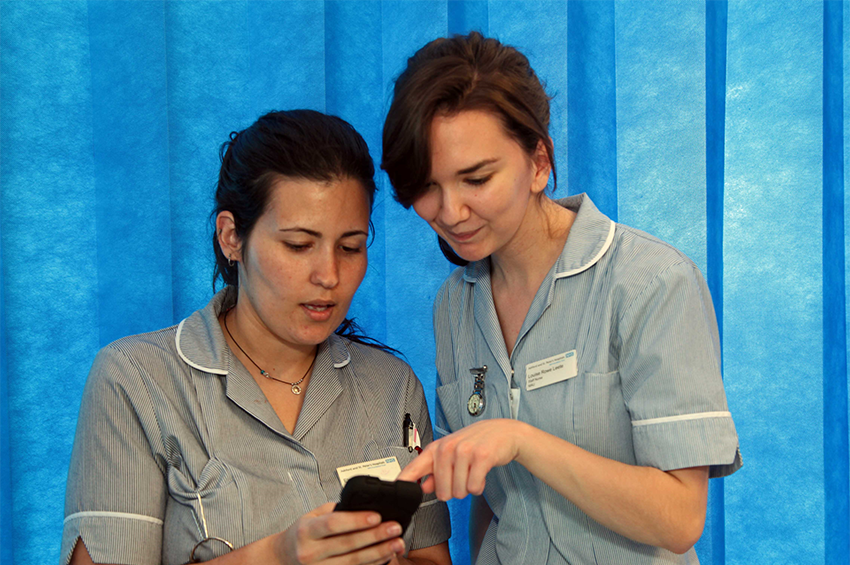 VitalPAC launched on the wards

Our Electronic Medical Record project received £3.9 million in funding last year from the Department of Health. We will begin digitising our medical records this year. Another project is also underway, after funding was awarded by the Nursing Technology Fund last year, to implement a Vital Signs solution. This technology, using handheld mobile devices, enables our nurses to record patients’ observation data electronically. 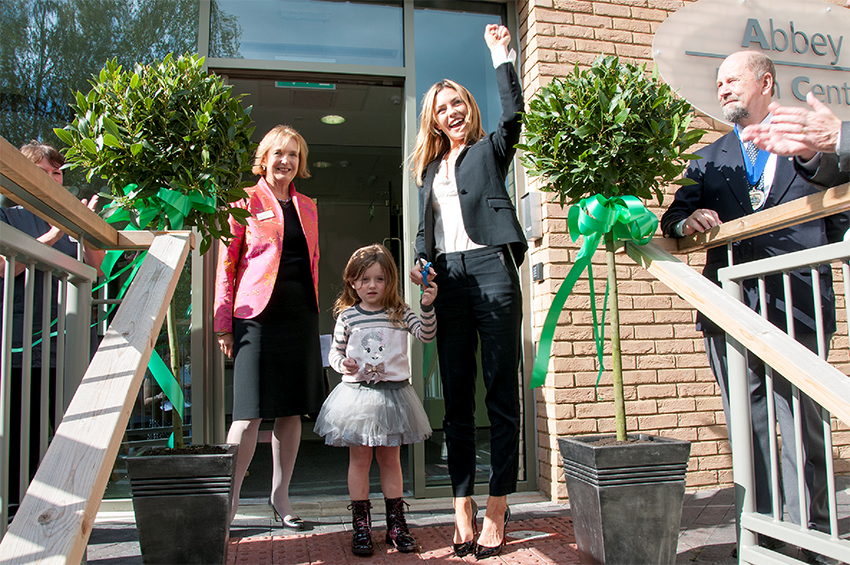 The official opening of the Abbey Birth Centre in September 2014. Chairman Aileen McLeish with celebrity Abbey Clancy and her daughter

The Abbey Birth Centre, our new £1.5 million midwife-led facility, opened its doors in May on the International Day of the Midwife. Situated next to our existing maternity unit at St Peter’s Hospital, this has been purpose built to provide a modern, homely and relaxing environment for women who have normal and uncomplicated pregnancies and want to give birth in a less clinical setting. 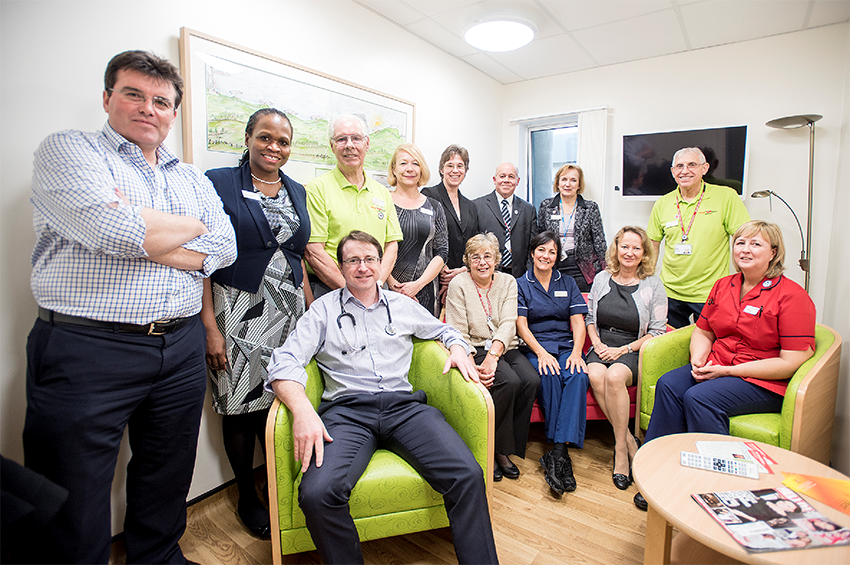 In September a new chemotherapy service was introduced at Ashford Hospital, delivered in partnership with The Royal Surrey County Hospital NHS Foundation Trust. This is an important development in providing cancer treatment for patients locally, rather than having to travel to Guildford or London.

Members of the board with HeartBeat Support (Woking) volunteers and staff from the Cardiac Unit at the official opening event in November 2014.

This year we have continued to reconfigure our ward space to help ensure patients get the right and most appropriate care as quickly as possible.

This included moving and upgrading our coronary care ward (Birch Ward) at St Peter’s Hospital so it is now adjacent to our Cardiac Catheterisation Labs, creating a complete Cardiac Unit. Patients can now receive more efficient treatment from one, modern, bespoke location. 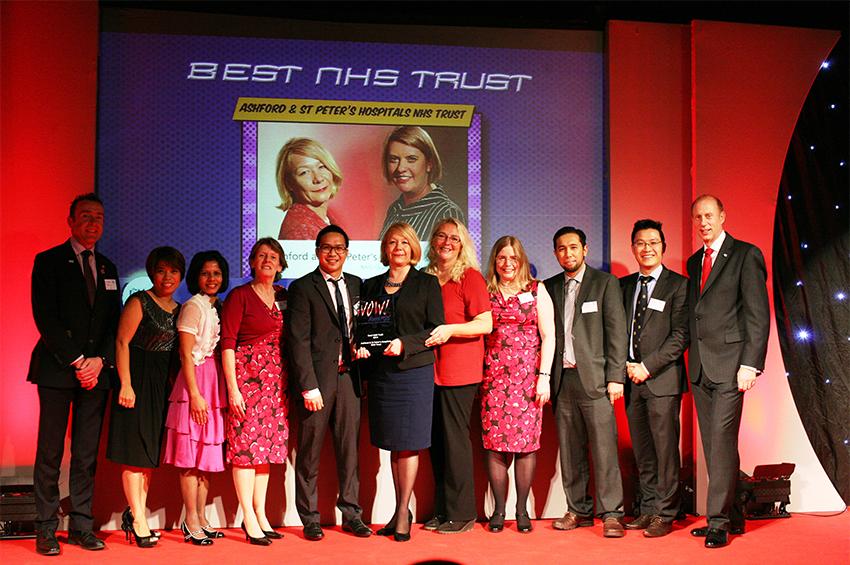 Chief Executive Suzanne Rankin (middle) and other members of staff collecting the WOW! Award at the gala ceremony last November.

Last November our hospitals were named as ‘Best NHS Trust’ at the national WOW! Awards Ceremony. Maple Ward was also highly commended in the WOW! ‘What a Team’ category.

More than 130 members of staff and guests of Ashford and St Peter’s Hospitals celebrated the Trust’s Staff Achievement Awards in April 2015. The event was hosted by Trust Chairman Aileen McLeish and Derek Williams, Chief Executive of The WOW! Awards, widely regarded as a guru of customer service.

On 18th May 2015, the Trust won Quality of Care Award at the CHKS Top Hospitals Awards. We were also named as a Top 40 Hospital by CHKS for the third time in a row. 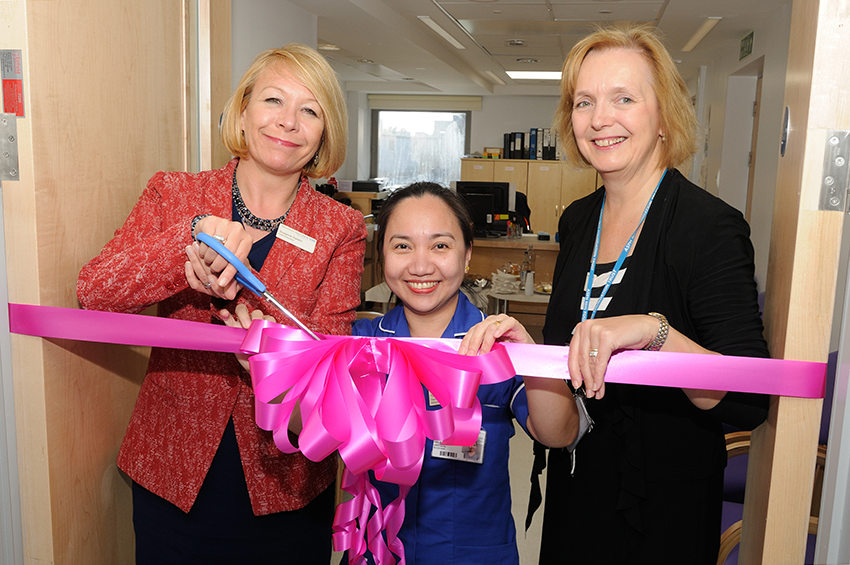 A £1.2 million development, the new Lounge offers greater comfort for patients coming into hospital for planned surgery. It is situated in a purpose built unit much closer to our main Theatres and consists of separate male and female waiting rooms and fully equipped consultant rooms. Patients can now be assessed more quickly in more spacious surroundings which respect their privacy and dignity.