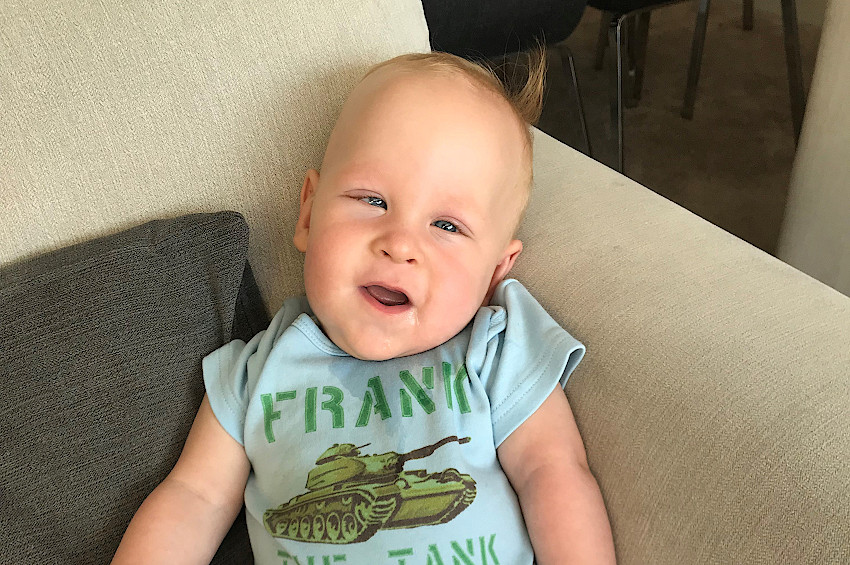 Frankie Thompson was born at 24 weeks at St Peter’s Hospital Neonatal Intensive Care Unit (NICU) and Consultants told Michelle and Pete (Mum and Dad of Frankie) that he was very poorly.

Consultant Dr Peter Reynolds, who led the team that cared for Frankie, said: “He was both very premature and also about half the weight he might have been expected to be, his chances of survival were initially slim. However, he responded very well to intensive care and support, and his progress amazed us all.

“We are all delighted that Frankie has had such a great outcome — he is now the smallest surviving baby we have ever cared for in our NICU.”

Mum Michelle is very pleased with his progress and is starting to plan ahead with confidence.

“Watching him for the first three months and wondering what would happen was very difficult for me but also as a family. Frankie has a step-sister called Tilly and the nurses were very good to her and she remembers Kath very fondly for letting her hold her brother for the first time.”

As with many parents with new babies so many things are measured according to the “red book”. This records many milestones that help with monitoring whether the baby is thriving. Frankie’s mum, Michele is happy to report that things are looking good and said, “It so lovely now because we can use his red book to record his milestones. He eats well and he rolls over now too.”

Frankie’s recent visit to the beach was very reassuring for Michelle as he loved the waves and seems to have not been troubled by the cold water at all, he just laughed and splashed in the waves enjoying some “Mummy time”.

Another milestone was swimming. Michelle and Pete decided to enrol Frankie in a local swimming group called Turtle Tots to see how he would do. Michelle took great care in selecting a group with a pool that is warm enough for him to be comfortable in and again he loved it. Frankie has successfully completed his level 1 and this includes a swim under the water all on his own. Well done Frankie.

Michelle was very happy about his progress but also very happy with the treatment she and Frankie received at St Peter’s Hospital and added, “Without the treatment at St Peter’s we would not be able to celebrate all the things that Frankie has achieved so far. Thank you very much for everything you have done for us.”