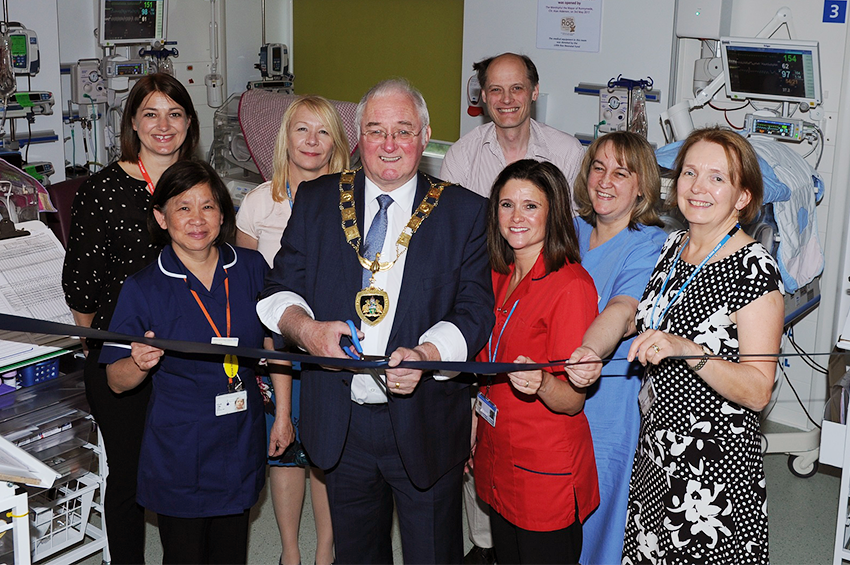 The Mayor of Runnymede, Cllr Alan Alderson, joined staff and families at St. Peter’s Hospital on Wednesday 3rd May to officially open a new room on the Neonatal Intensive Care Unit (NICU). The room will house four extra cots for the unit, enabling more babies from across the Kent, Surrey and Sussex region to receive specialist care.

Dr Paul Crawshaw, Consultant Neonatologist, said: “St. Peter’s has the only NICU in Surrey, so sick and premature babies who need this high level of support are transferred to us, until they are well enough to go back to their local hospital. When we are full babies from around the region will be taken to another unit and this could be much further away from home, making it really difficult for the parents, so having these extra four cots makes a huge difference to our capacity.”

After taking a tour around the unit and chatting to staff, Mayor Alderson cut the opening ribbon, before joining families for another celebration – the launch of the new Little Roo Neonatal Fund.

Replacing the ‘Early Births Fund’, the new charity aims to raise the profile of the work of the Neonatal Unit and encourage fundraising for ‘extras’, above and beyond the essential infrastructure and equipment provided by the NHS.

The charity launch was attended by several families who have raised large sums of money for the unit, some of whom shared their own heartwarming stories. Mother Debbie Thwaites came with her two thriving children – Charlotte who was born prematurely at 33 weeks and Oscar, who arrived at just 26 weeks – and described the ‘amazing’ care provided by the NICU team. She talked about the trust parents need to place in them, particularly when going home at night and leaving their babies, and how they go above and beyond to support families through such a traumatic time. Debbie is also a member of the Little Roo Neonatal Fund board, offering valuable support and insight to the charity from a parent’s perspective.

Mayor Alderson added his own thanks to the team, saying that the visit to the Neonatal Unit was a real highlight for him.

Dr Crawshaw said: “It was a great event and a real opportunity to thank all the members of our charity group – colleagues, ex-colleagues, volunteers and families – for all of their hard work. It was also fantastic to see some of our young patients return looking so healthy and happy and I would like to thank their families for all of their support in fundraising for our charity. Their commitment to helping other families in a similar situation is really admirable.”

More information on the Little Roo Neonatal Fund can be found at https://www.justgiving.com/LittleRooNeonatalFund.

Pictured above are members of the team join Mayor of Runnymede, Cllr Alan Alderson, to officially open the new Neonatal Intensive Care Room.