Celebrating the past, present and future of the NHS 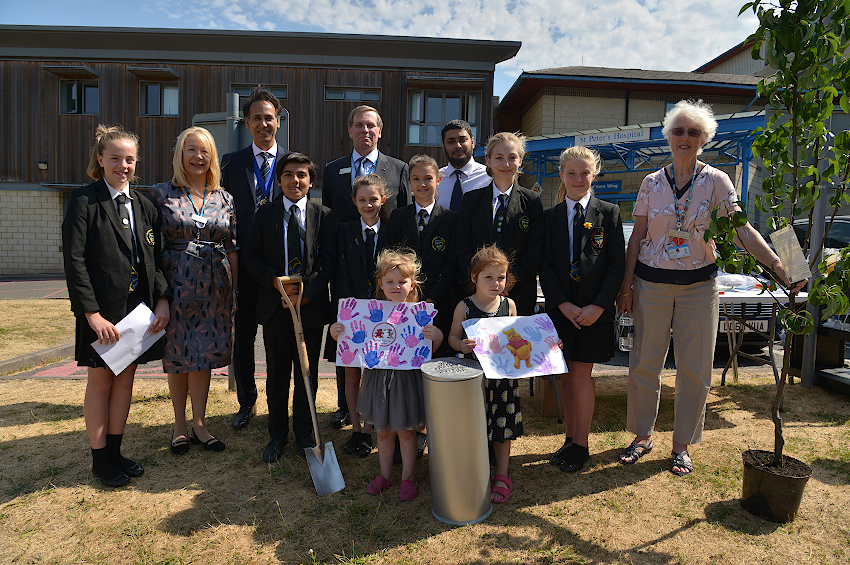 On Tuesday 3rd July Ashford and St Peter's Hospitals staff and volunteers were joined by special guests to bury a time capsule as part of the celebrations for the 70th birthday of the NHS.

The event was all about preserving the present for future generations, so children from Magna Carta Secondary school and First Steps Day Nursery (the nursery on site at St Peter's Hospitals) came to join in the fun. We were also delighted to be joined by Deputy Mayor of Runnymede, Cllr Parshotam Sohi.

The event began with an address by Chairman, Andy Field, who said: "Burying a time capsule is a first for us at Ashford and St Peter's Hospitals, but on the 70th birthday of the NHS it is the perfect time to reflect on the past, present and future. The NHS is a truly special institution, one we all take immense pride in. The challenges we face are well documented but this week is an opportunity for celebration and sourcing all the items for our time capsule has been great fun."

A huge variety of things were included in the capsule, such as hospital site maps and photos, frequently used forms - such as growth charts for boys and girls, drug charts and operating consent forms. Frequently used pieces of kits - such as a blood taking set, stiches, anti-embolism stockings, gloves and an oxygen mask were also put in, along with newsletters from different departments and some paintings with handprints from the young nursery children.

The Magna Carta students read a thought-provoking letter they had written - 'to the children of the future about the NHS today'. They had chosen Ashford and St Peter's as their Student Voice charity and raised almost £2000, which will go towards the purchase of a high level surveillance system on the children's ward.

A pear tree will be planted by the time capsule, recognising the huge amount contributed by the volunteers at Ashford and St Peter's. A plaque will also be added - reminding future generation to dig it up in fifty years-time as a gift from the past.